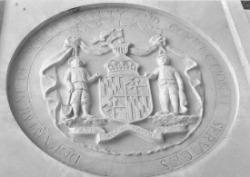 This section on architectural precast concrete and cast stone will only deal with the differentiation of the two and as much of their specifics as becomes necessary within these discussions. This is certainly not meant to be an all-inclusive covering or any covering at all of the modern precast industry. It's going to be about the technical processes involved in the practical creation of molds and a bit about the final cast stone or precast concrete item, but not at all about the business of being in this industry.

But first, an overview. 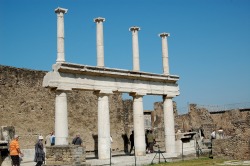 At one time there was the stone and the chisel to  produce a block of building material. Then there came the Romans, who discovered combinations of natural cements that when mixed with local sands and stones and hydrated could create something similar to the Portland cement based concretes used today. The first known examples of precast concrete were spring stones at the bases of  the aqueduct system arches throughout southern Europe. Forms were created for special shapes and filled with concrete, rather than having to custom cut large stone blocks as had been the usual.

In the late 1300s Brunelleschi designed and built the largest spanning dome known at the time and  is still the largest masonry dome in existence.  It was generally not thought possible to span such a distance with the technology known at the time. The then 1200 year old Pantheon was a comparable span, but the Romans had achieved it with concrete, which had become a lost technology by the beginning of the dark ages and had not yet been rediscovered. By one hundred years later the formulas had been recreated and by the mid 1800s Portland cement was developed which had considerable improvements in strength and durability. By late that century steel was developed allowing for the use of reinforced concrete which revolutionized the construction industry.

The development of steel allowed for structural breakthroughs unparalleled ever before. The reasons for this has to do with the complimentary natures of the two materials, concrete and steel.

Sound concrete  can easily develop a compressive strength of 5000 psi (pounds per square inch). Since concrete weighs approximately 150 lbs per cubic foot, a simple calculation will show that, ignoring wind loads and other structural considerations, a column of concrete could be built to a height of nearly a mile (4800 feet) before the concrete at the base would fail to support any additional height. But the strength of concrete in tension is only about one tenth that strength. A beam under load develops a neutral axis, above which the concrete is in compression and below which it is in tension. Even if you are unfamiliar with the mechanics involved, it should be easy for you to imagine that, say a ten foot long lintel being loaded until failure would develop cracks on the underside as everything under the neutral axis stretches and is pulled apart at failure.

On the other hand, grade 60 steel has a yield (tensile) strength of 60,000 psi. Concrete bonds well to steel and the resultant composite material joins the strengths of each to be able to resist heavy loads over long unsupported spans.

Prestressed concrete comes in two varieties, pretensioned and posttensioned. In pretensioned concrete, numerous fine wire strands are placed under a heavy tensile load and concrete is poured around them, allowed to harden and then the strands are cut, thus the concrete holds the steel strands under the same tension they were mechanically subjected to previously and the strands transfer their tensile forces to the concrete, keeping it under compressive stresses where the concrete is strongest. Forms are cambered, or slightly raised in the middle, so the combined steel and concrete structure are simply put into greater compression when a load is applied, and the nuetral axis is thus lowered so that little of the concrete is in tension. This system allows for literally millions of pounds of load to be supported. Because the wire strands are each rather small in diameter, it is important to avoid the use of sodium based concrete accelerants as even a relatively small amount of corosion these ions can cause can lead to steel strand failure.
Powered by